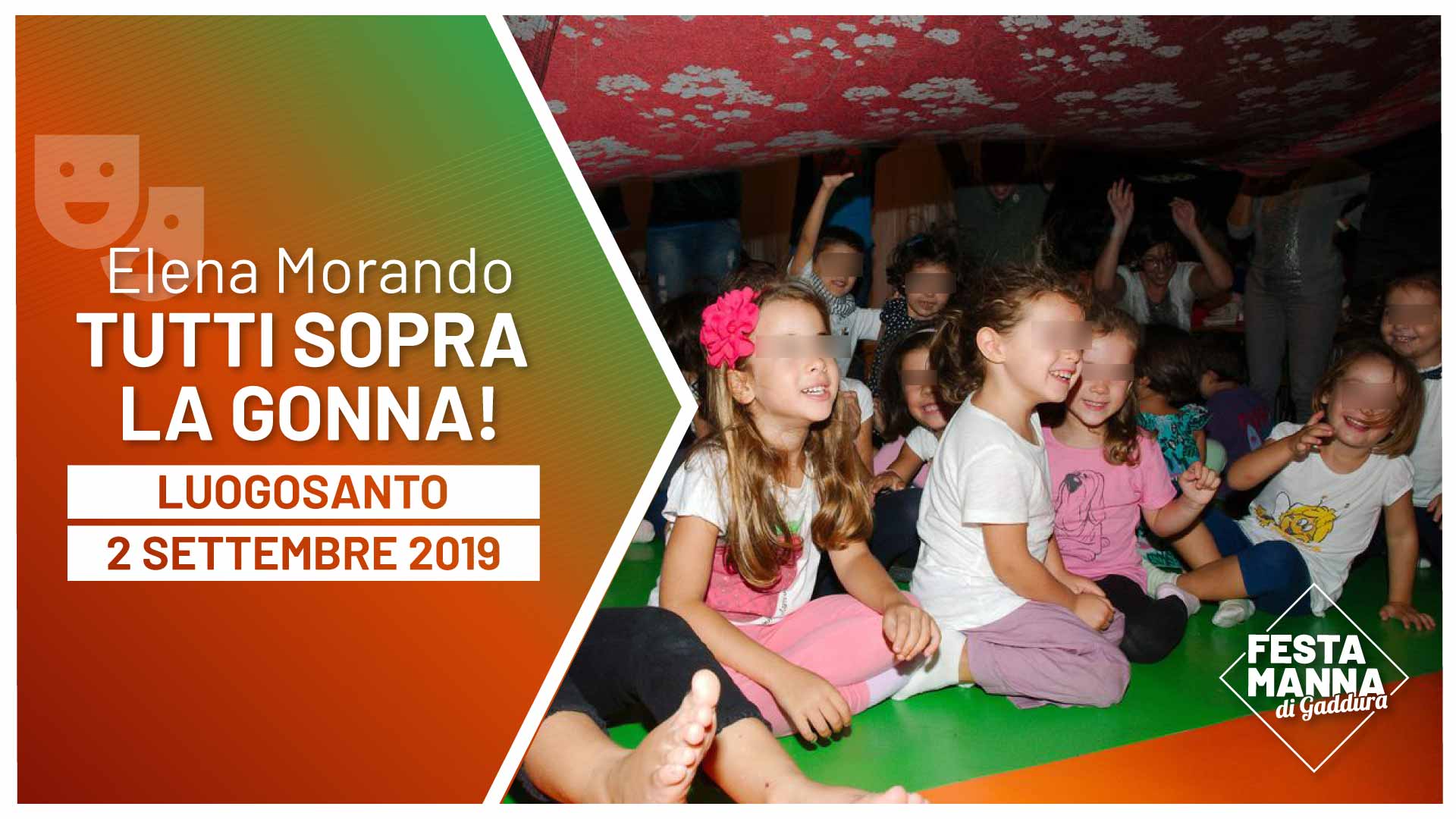 All over the skirt! Animated and playful readings for girls from 2 to 8 years old, curated by Elena Morando.

All over the skirt! is a very special animated outdoor reading and play together with the artist Elena Morando: in the shade of the oaks of the church of San Paolo, the children will listen to the fairy tales sitting on Elena's long skirt and will be involved in the narration in a playful way.

Fairy tales are known, must be told, come from oral culture but not only, they are also cultural creations that respond to ancient contents and also psychological insights of great interest for the growth of each child. The fairy tales, heard by every child, and read by an adult voice, can help you grow and become more creative; every fairy tale read hides a secret meaning for every child who will become his personal fantasy treasure. The fairy tales draw cartoons and television animation films, but in them there is something more: the freedom to decide the times in which the episodes recounted take place and also the shapes and appearance of each character, the tranquility of abandoning oneself at the time of reading that expands, as the writer Daniel Pennac says well, "the time of life". From this awareness comes the animated reading: "The thousand and one fable" that draws on the fairy tales of the original creation of Elena Morando.

The animated reading lasts twenty to thirty minutes and then half an hour of guided play is planned with the children within the "fairy tale territories".

The narrator has a wide skirt that she lays on the floor and where the children sit and listen. Sounds, movements and characters are explored starting from the "objects of the fairy tale": small and big things enclosed within the "suitcase" that the actress-reader brings. Through them children learn to interpret the clues and mysteries of the fairy tale itself, transforming the "metaphorical game" of reading into a "real game". Later the skirt is withdrawn and folded and the children play together with the narrator, animating the fairy tale and the characters told.

Elena Morando is an interdisciplinary writer and artist. He takes care of projects for adults and children related to theater, literature and the visual arts and teaches martial arts in the school "Bozzoli di seta e tigre di tigre" in San Pasquale in Gallura. He wrote and directed "The evident harmony of things", winner of the 2008 Avisa Competition and produced by the Regional Ethnographic Institute of Nuoro in 2010. In 2010 he is the collection and first work of poetry "Mai più la parola cielo" published by Aìsara (Cagliari), selected among the ten finalists of the Mario Luzi 2011 Poetry Prize. With "Near the heart" he won the "Claudia Sbarigia - Stories for cinema - Premio Solinas 2009" scholarship. Between June and July 2015 she was a guest of the 58th "Festival dei due Mondi" in Spoleto, opening the "Sconfinamenti" section with the staging and performances "The Eighth Step", a tribute to the painter Linda Salerno. With the film "The Eighth Step" (Film production K10 - Martin Kunz) it was selected at the 2016 Cannes Film Festival in the Short Film Corner section. Equally of 2016 is the illustrated book "The Memories of the Peppermint" (Else Edizioni) with the drawings of Anke Feuchtenberger. He actively collaborates with the K10 Contemporary Art Archive in Lugano in Switzerland and with the international collective of artists Riù Collective.

The show is wanted and organized by the Municipal Tourist Office and the Municipal Library, with the collaboration of the Ludoteca "Puffolandia" and the financing of the Municipality of Luogosanto and of the Department of Tourism of the Autonomous Region of Sardinia. Participation is free. For further information: [email protected] , Facebook: @LuogosantoTouristOffice, +39.079.60.18.959