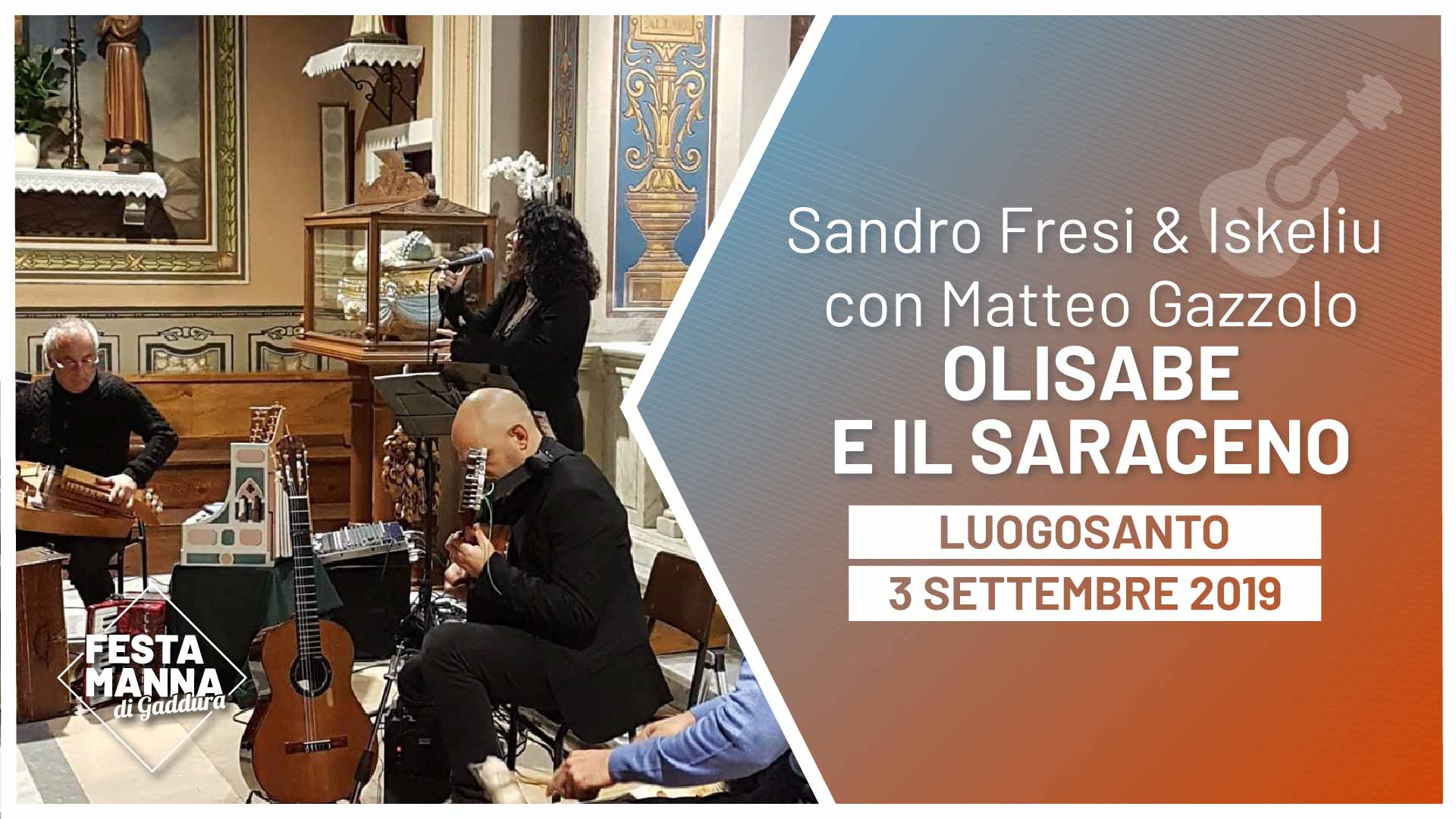 In the splendid night scenery of the rural palace of the "judges" of the Kingdom of Gallura, the music by Sandro Fresi Iskeliu and the words of Francesco Tamponi read by the voice of Matteo Gazzolo will tell the war and love exploits of the Saracen nobleman Al Furtani and the Gallurese slave Olisabe.

We are in the year 1010 when Mujaid Al Amiri (better known as Museto), Lord of Denia and the Balearics, decides that the time has come to build his kingdom in a strategic position in the Mediterranean. He therefore decides to conquer the Giudicato of Gallura with a fleet of 120 Saracen ships that he displaces in front of the Gulf of Cugnana, in the immediate vicinity of the Maddalena Archipelago. Following him, the nobleman Al Furtani, who during a raid before the final attack falls in love with Olisabe, a young Gallura slave who manages to get him to donate to Al Mujaid.

The final attack results in a total defeat of the Saracens, whose ships are thrown on the rocks by the mistral while the sailors are massacred by the rumy shardanya between the coasts and the islet that the Arabs will call "del Martirio" and the Sardinians "Of Mortorio". The great Museto abandons the coasts of Gallura without honor with the flagship, while Al Furtani leaves his Saracen seed on the island.

The story is told by the vanquished, through the words that after a hundred years and three generations come out of the mouth of Plabe Sarakino, grandson of the Sardinian slave-eyed woman who has just donated all her possessions to the Church with his wife to save one's soul.

The abbot who closes the story and drew up the deed of donation in a convaghe, entrusts these events to the designs of providence, "who deigned to show the ineffable splendor of his work in this court of Gallura entrusted to the Holy Martyr Simplicius, under whose protection we believe we are governed and saved".

The music, partly composed by Sandro Fresi, partly of oral tradition, is performed with traditional medieval acoustic instruments such as the Arab oud, the hurdy-gurdy, the harmonious harmonious and the continuous and percussion wind instruments of Sardinia and of the Mediterranean. The traditional repertoire includes Sardinian, Catalan, Corsican-Gallura and Provençal music. On this occasion the Iskeliu ensemble is composed by the singer Paola Giua, the guitarist Alessandro Deiana and the percussionist Antonio Fresi. The theatrical reading is entrusted to the actor Matteo Gazzolo.

Sandro Fresi has devoted half his life to studying the popular musical traditions of Sardinia and the Mediterranean. He is one of the most appreciated ethnic researchers and musicians in Sardinia and beyond. He uses ancient instruments to interpret the rhythms of our time. Siae composer, is the artistic director of the cultural association "Iskeliu", based in Tempio Pausania. Iskeliu is also the name of his group, with whom he plays his border music at numerous festivals and events of ethnic music in Sardinia, Italy, France, Germany, Holland and Australia.

Matteo Gazzolo, descendant of a branched family of Italian theater, made his debut at the age of 14, studied acting for a long time and in particular poetic reading. After the early years of television work in RAI, he decided to leave that world to deepen his studies on the theatrical transposition of poetry and literature. He works for a long time as a musician and singer in jazz clubs, he writes soundtracks for videos, documentaries and theater shows. Since 1998 he has dedicated himself to teaching actor techniques. He lives between Italy, Norway and Sardinia, where he founded his "Scuola per Attori" and the study project "suonidiversi" with which he gives life to a long series of theatrical performances of narration and poetry. He devoted himself to research into the sound of the amplified narrator and the use of live digital instruments. His theater, based on the relationship between music and words, always expressed in the form of a theatrical concert, has a fantastic and at the same time didactic address.

The show is wanted and organized by the Municipal Tourist Office and the Municipal Library, and is financed by the Municipality of Luogosanto and the Department of Tourism of the Autonomous Region of Sardinia. Free admission. Booking not necessary. 90 seats. Access from the SP 14 Luogosanto-Arzachena. For further information: [email protected], Facebook: @LuogosantoTouristOffice, +39.079.60.18.959