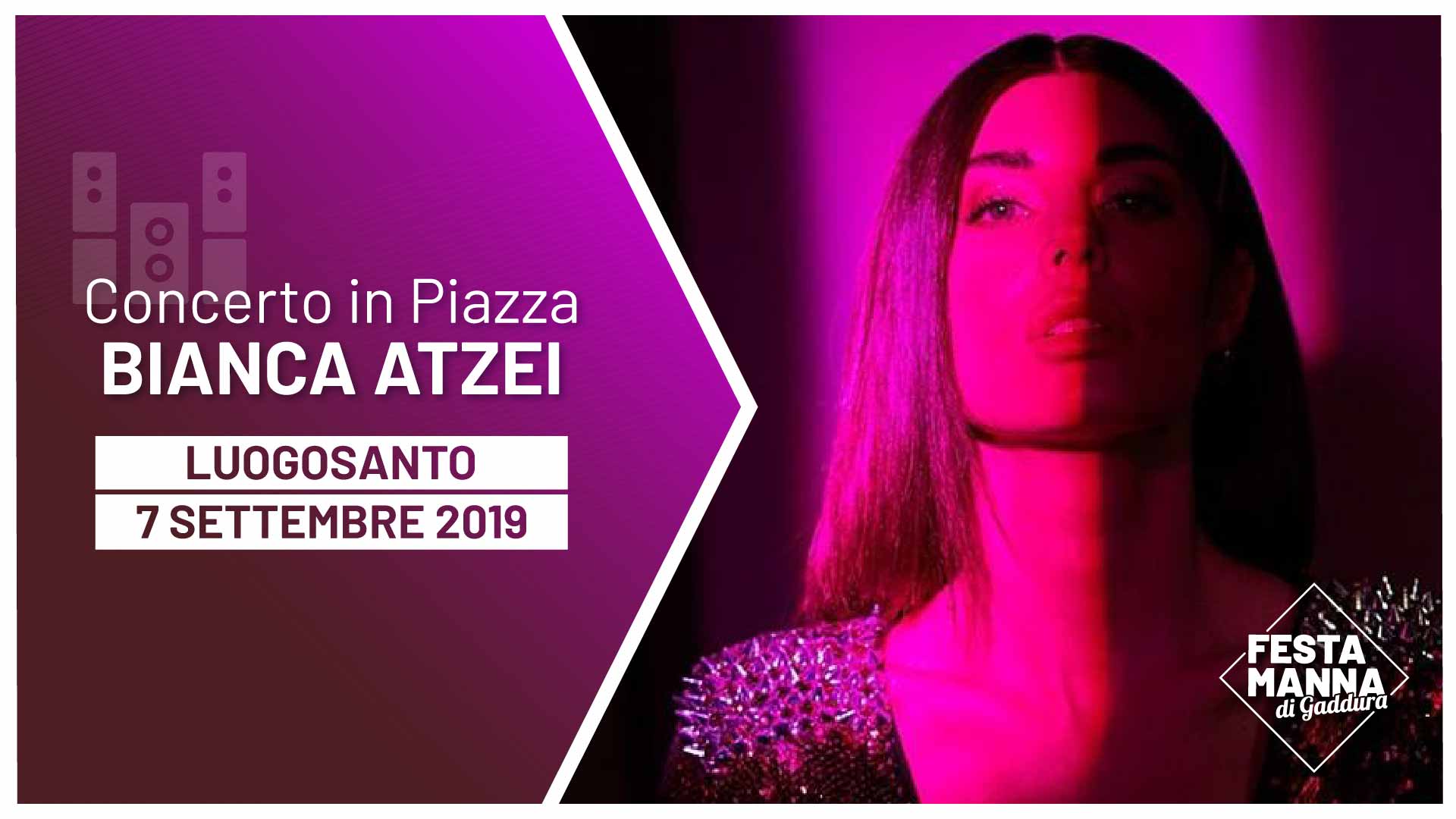 The Sardinian-Milanese singer Bianca Atzei performs in Piazza Incoronazione on one of the last dates of "Our Tour 2019".

Bianca Atzei, born in 1987, was born in Milan with her heart in Sardinia, her parents' region of origin. She began studying singing as a child and at 17 she attended a music academy. He listens to Whitney Houston and Mariah Carey but is open to any musical genre, and particularly loves the '60s music of interpreters like Luigi Tenco, Patty Pravo and Sergio Endrigo. Soon many collaborations arrive for advertising and radio jingles, commercials, television themes and various television programs.

On August 3, 2012 the single "True Love" comes out, which soon becomes a great radio success and on YouTube. In the same autumn the success with the single "La jealousy" in duet with Francesco "Kekko" Silvestre dei Modà is doubled. In 2013 he collaborated with singer-songwriter Niccolò Agliardi in the song "Fino in Fondo" and continued with Kekko Silvestre. Just the Modà frontman is the author for Bianca of his summer hit "The fear I have of losing you" which gets a huge success. Bianca Atzei is a finalist of the Music Summer Festival broadcast on Channel 5, the protagonist of the biggest events of the summer, of a tour in her Sardinian land, and in October opens the dates of the Modà autumn tour. However, the biggest emotion comes when Gianni Morandi wants her to duet with him in the closing of "Gianni Morandi - Live in Arena".

Bianca is also the interpreter of "One Day I'll Fly Away", lead song of the soundtrack of "Anna Karenina", the fiction with Vittoria Puccini inspired by the novel by Lev Tolstoj aired on RAI 1. La song is a song by American Randy Crawford brought to success, among others, by the character of Satine played by Nicole Kidman in the 2001 film "Moulin Rouge!" Bianca takes part in the 65th edition of the Sanremo Festival with the song "Il solo al mondo". In 2017 he returns to the Sanremo Festival in the race with "Ora esisti solo solo tu".

On May 8th the Sanremo piece is certified FIMI gold for 25,000 copies sold. The second single "Abbracciamo perdonami gli sbagli me" comes out simultaneously with his first novel, "Ora esisti solo tu" (Mursia). At the end of the year he enters the cast of the Tale tournament as a show with the imitations of Emma, ​​Noemi and Patty Pravo, finishing eighth.

From May 1st a series of concerts will start entitled "Our Tour 2019". On June 4, 2019 the summer single "La mia bocca", of which she is the author, is published on Youtube.

The concert is wanted, organized and financed by the Committee "Festa Manna 2019 Fidali 1975" with the sponsorship of the Municipality of Luogosanto and of the Department of Tourism of the Autonomous Region of Sardinia. Free admission. Booking not necessary. For further information contact the Committee on Facebook @reginadigallura or at the number 3461399368.