Every 25 January San Paulo of Lu Laldu is celebrated: on this occasion, in the little church of San Pancrazio, a lunch of meat and lard is offered.

Every 3 February the San Biagio Festival is celebrated in the local church.

Every 12 May is a heartfelt festival dedicated to San Pancrazio and on 5 August San Maria Maggiore is celebrated (Madonna of the snow).

In June this cultural event is organised with the purpose of promoting tourism, enhancing the cultural richness and promoting the territory’s food and wine.

This is a summer event held by locals in mid-July, also called Passizendi in Locusantu (walking in Luogosanto). In the afternoon, visitors flock to the village of Mariano for a gastronomic experience, while the white night comes alive with imaginative artists, local producers and friendly Luogosanto locals offering handicrafts and local foods. Don’t miss the music and folklore.

The festival takes place on the last Friday of July, and features the heritage of the Gallura language. The event is dedicated to Ciccheddu Mannoni, one of the most well-known singers with the Sardinian dialect. The festival runs alongside the local wine and cheese festival.

Since 1972 the Pro Loco has organised in the first weeks of August, the ”Festa del Turista”, one of the most important events in Northern Sardinia, a strong sign of the sense of hospitality of the local community towards tourists and all who visit this land that is so rich in culture, beauty and tradition. The festival is enhanced by tastings of roast sausage, typical cheese and wine. Every year the festival is “certified” with the creation of a feature souvenir cup made either with ceramic or terracotta.

Over the years Aglientu has earned the deserved title of “country of festivals”. And in fact during the summer there are different festivals: bread, wild boar, seafood, pancakes etc.
Among the most important festivals: the famous Seadas Festival, which are typical Gallurian sweets that are handmade and topped with strawberry honey. This dish is often paired with the famous Gallura Muscat.

The San Quirino Festival celebrates the holy martyr after which the church is named, now located on the outskirts of Luogosanto. The festival is held in August, and is the second largest party of the country. The festival tradition is to organise everyone outside in the main square and in via Tempio, a lively festival with long tables for tables for dinner complete with meat and wine produced by farmers and local winemakers.

The feast of grandma’s gnocchi, is so called because they are made by hand using the old-fashioned methods of grandmothers. The gnocchi are seasoned with meat sauce made from hunted local wild boar. The festival is dedicated to tourists and celebrated in mid-August. 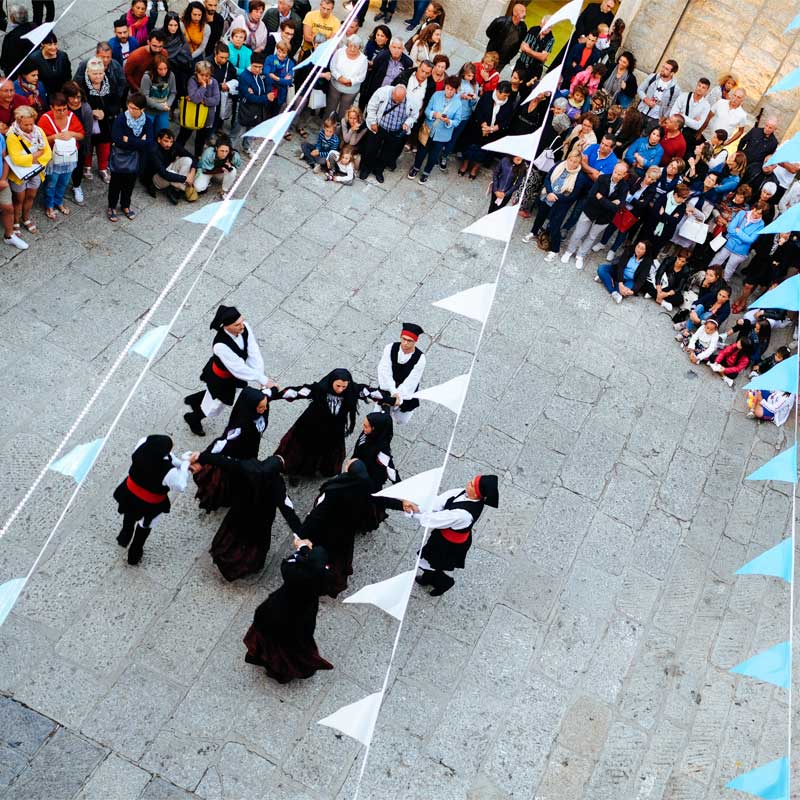 The Festa Manna di Gaddura is one of the oldest religious festivals in Gallura, celebrating 788 years in 2015. The festival takes place in Luogosanto each September, celebrating and honouring Nostra Signora Regina della Gallura (Our Lady Queen of Gallura) with novenas, masses and processions involving pilgrims from all over the Diocesi. The festival includes horse races, parades of flags from the churches and choirs and folk groups from the Gallura countryside. Every year there is a big public concert organised by the ‘fidali’ committee.

- Patronal Festival of Our Lady of the Rosary, October - Luras

This is a true party for the people of Luras, celebrating the patron saint’s day, with festivities both secular and religious lasting four days. This festival is followed by the festival of San Francesco d’Assisi and the festival of Madonna del Buoncammino (Our Lady of Buoncammino).

At Christmas, the prior of the confraternity of the Holy Cross with the help of the villagers, fits a nativity scene that shows scenes of ancient daily life of the country. The characters in the scene are dressed with traditional costumes. The landscapes that form the backdrop to the Nativity are rigorously and faithfully reproduced to show the beautiful views of Luras. Every year a different subject is chosen so as to not repeat itself and to renew surprise and emotion