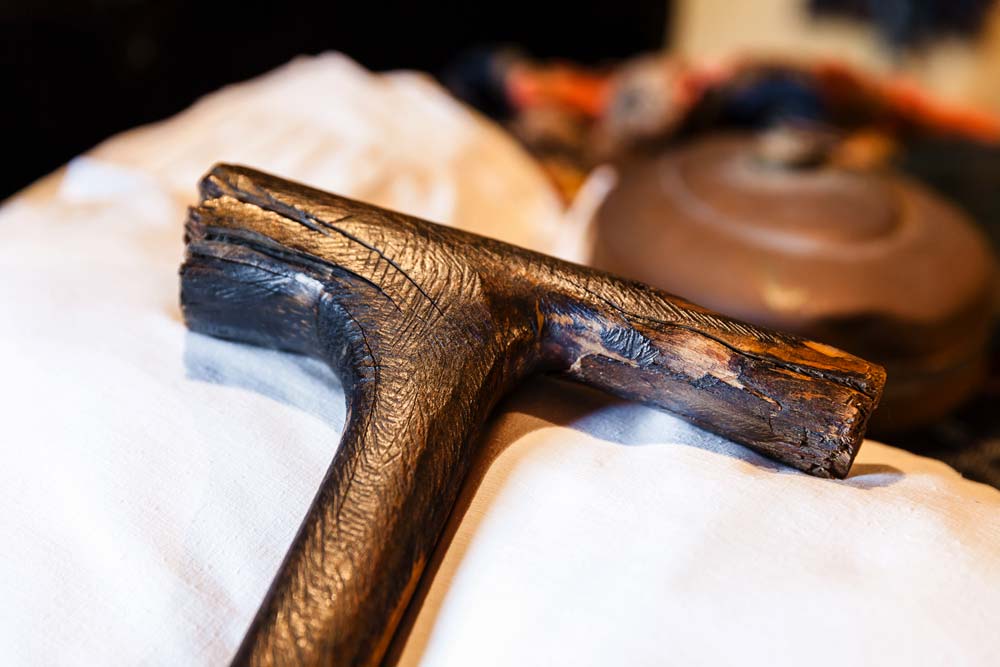 Ten years ago, Luras opened the Galluras Museum, an ethnographic museum which, as its name suggests, contains the history of agro-pastoral civilisation and traditions of Luras and all of Gallura, the territory of northern Sardinia.

The museum is an ancient house in the middle of the village that was carefully reconstructed, where you can experience the daily life of centuries past, including viticulture, wool processing, textile art and the cork industry, one of the most productive industries in the area.

The museum has become famous for displaying the hammer of Femina Agabbadòra.

Who was the Agabbadòra? She was a woman whom until the last century had a special role in society in different parts of Sardinia: as her name suggests, deriving from the Spanish word 'acabàr' which means "end", she intervened in alleviating the suffering of the sick and dying with the stroke of a special wooden hammer (su mazzolu o lu malteddhu). Always dressed in black and following a precise ritual, she could also act using a little utensil under the patient's cushion or she used the pillow directly for suffocation; during the ritual she would let all family members leave the room and hid the sacred images and crucifixes.

This practise, which was seen as a chance to end the lives of the sick and suffering, was more common in rural communities by meeting the needs of supporting families who often had to stay behind to care for their sick family members.

Often the Agabbadòra or Accabadora was also a midwife, or the "mastra de paltu" who was called to help in the homes of women in labour. This figure, who was a cross between legend and reality, silence and mystery, was entrusted by the community to not just give life but to take life, a task which was not only moral.

The late Pier Giacomo Pala, the creator and curator of the museum from 1981 began to seek information about this mysterious character by collecting testimonies from the elders in Luras. He consulted documents until he eventually found the hammer of Agabbadòra located within an old dry stone wall next to a sheep pen where one of these women had lived. The hammer can now be found at the Murseum of Luras. From his research he wrote the book l’Antologia della femina Agabbadòra - tutto sulla femina Agabbadòra (The Anthology of Femina Agabbadòra - all about the Femina Agabbadòra) that allows you to discover the events related to these mysterious women.

The story of the Femina Agabbadòra also inspired the Sardinian writer Michela Murgia for her novel Accabbadòra (Einaudi, 2009) and winner of the Premio Campiello prize, which tells the gripping story of one of these women through the eyes of an orphan she had adopted.

This is the reason why the Galluras Museum is now called the Museum of Femina Agabbadòra, and continues to be one of the most visited museums in all of Sardinia with the most popular ratings on TripAdvisor (2015 data), which for many tourists is a reason to travel inland from the beaches, or to arrange a special trip to Sardinia all on its own.

What are you waiting for? Come to the Galluras Museum and get to know Sa Agabbadòra!

Getting to the Galluras Museum

Arriving in Luras via SP136, take the main street, Via Nazionale, where the museum is located. Parking is available nearby. The museum is always open, or you can telephone for a reservation. The staff will accompany you on a guided tour to discover the history of the Agabbadòra and traditions of Gallura.

Hermitage of San Trano and Nicola