Luogosanto: a religious place in the heart of Gallura 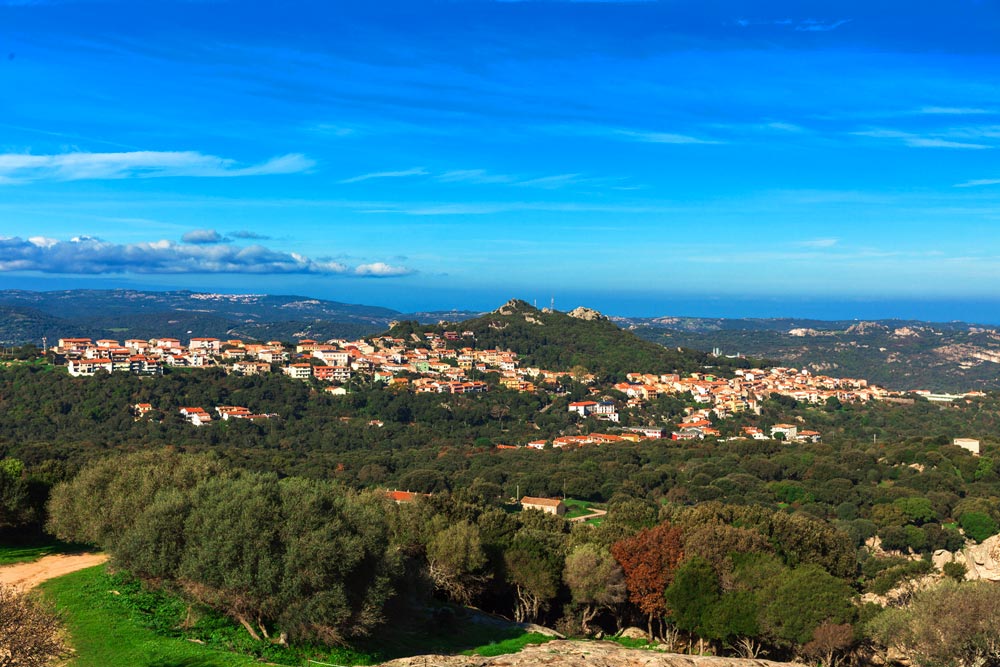 Do you know Luogosanto? It is one of the municipalities in Gallura, and has an important role in the religious history of northern Sardinia. It is easy to see that its name derives from "Locus Santus" and in this territory there are more than 20 religious buildings and many small rural churches. It's a worthwhile trip to discover these ancient places of faith, and to relive the religious traditions through processions, festivals and commemorations that still take place today.

There are various ways one can discover the Gallura where you can get to know these places and their little-known stories. Here is a brief religious itinerary that we recommend.

You can take an excursion through the country roads of this region to discover monuments such as the ‘Palazzo Medievale di Lu Baldu (Medieval Palace of Lu Baldu), small rural churches, old houses in the countryside, and ‘stazzi’ (old Sardinian rectangular houses you see in the countryside), which were once the economic and social centre of northern Sardinia. Today these places make up the historical landscape of Gallura, that includes farmland, vineyards, cork, and granite outcrops that make for a unique rolling landscape. 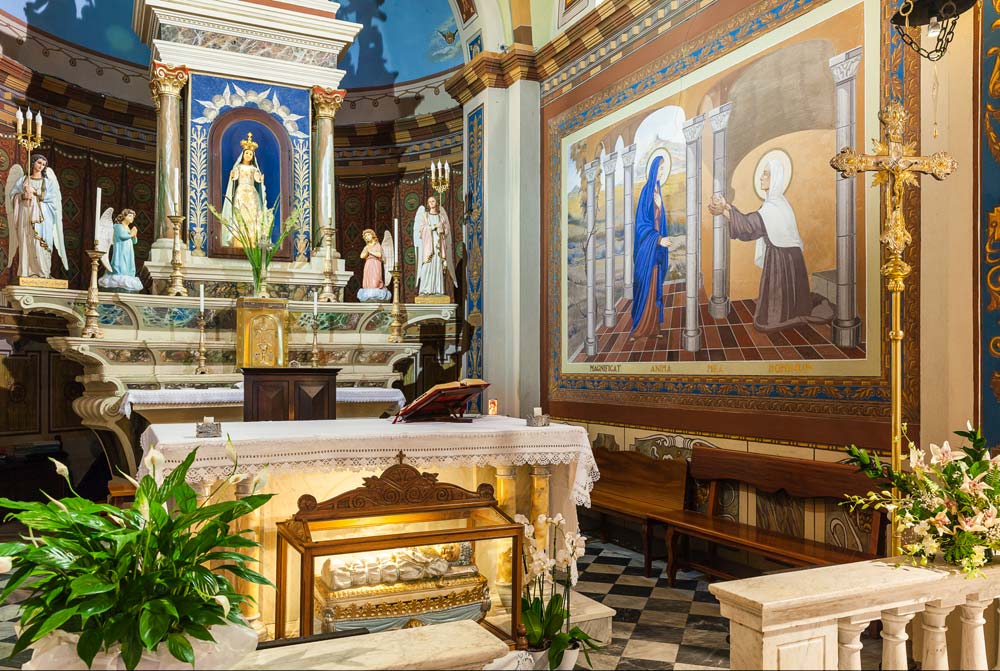 When visiting Luogosanto you cannot miss entering the Santuario di Nostra Signora di Luogosanto (Shrine of Our Lady of Luogosanto) in the centre of the country, which has a meaningful religious history to all of Gallura. You should know that the Shrine is a pilgrimage site that is travelled on foot from north Sardinia. It remained a centre of interest when the country fell during the invasion of Aragon from 500-700 AD when it then began to repopulate.

The Church is linked to the worship of Saint Nicola and Saint Trano: it was built at the place where, according to history, the Virgin appeared to the monks to show the relics of the two saints. The Sanctuary has a Holy Door, which is open to pilgrims every seven years for a full year. This is a concession that Pope Onorio III ordered the Franciscans to follow in 200 AD after discovering the bodies of the two saints.

The current door was built in 1700 by Louis Luchetti. He divided the door into three panels that tell the story of the church. The interior of the church has walls decorated by Carlo Guadagnini: depicting the fall of the Baptism of Jesus, Saint Nicola, Saint Trano and the Virgin.

Of interest: legend has it that the small statue of the Virgin inside the basilica was found in a box in a beach near Arzachena.

The name Luogosanto is likely derived from San Nicola and San Trano, two sanctified hermits who dwelt here in 500 AD. The places where the two saints lived were found by Franciscan friars who built two chapels, one of which is still open today.

It should be noted that the San Trano Church is small but always striking for those who visit. The church is located a few kilometres from Luogosanto in the countryside on the road to Arzachena, by taking the road to the Stazzo Concasoni. The church is on the top of a hill between rocks.

The interior is very simple and has a very special altar made from a single block of granite in front of a small cave, which has since been incorporated into the building, where the two saints found shelter. From outside you can enjoy a beautiful view of the surrounding, where on clear days, you can see the coast of Corsica.

Not far away is the 12th century St. Stephen's Church and the ruins of the castle. 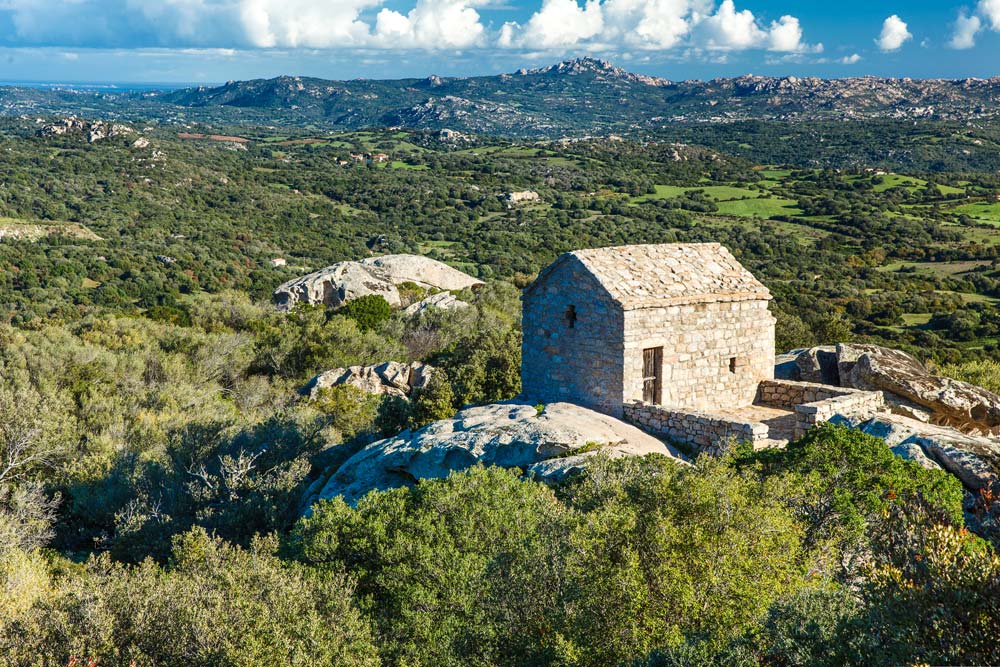 There are numerous rural churches in Luogosanto. There are more than 20 churches across the region that are dedicated to various saints. In Balaiana there are churches dedicated to Our Lady of Remedy, San Gavino of Li Coddi and San Salvatore. If you want to discover the inner region of Gallura, without a doubt visit a rural church in Luogosanto. The Church of San Leonardo originally accompanied the Balaiana castle, which exists today as ruins, and was perhaps the summer residence of the Giudici di Gallura. The church and castle are located on top of the hill surrounded by greenery and the view is breathtaking. Dress warmly because the hilltop always has a strong wind!

Rural churches have a very simple construction: usually consisting of a single room with walls covered by trusses made of granite, and are very graceful in their small size. Today they appear very well placed within the landscape. Formerly a place of worship for the inhabitants of the ‘stazzi’ (old Sardinian homes) and gathering places for all those who lived isolated in the countryside, they still keep alive the tradition of celebrating the saints in the spring and summer months.

Church of the Holy Cross