What to eat in Gallura: from Gallura soup to suckling pig and all the typical sweets 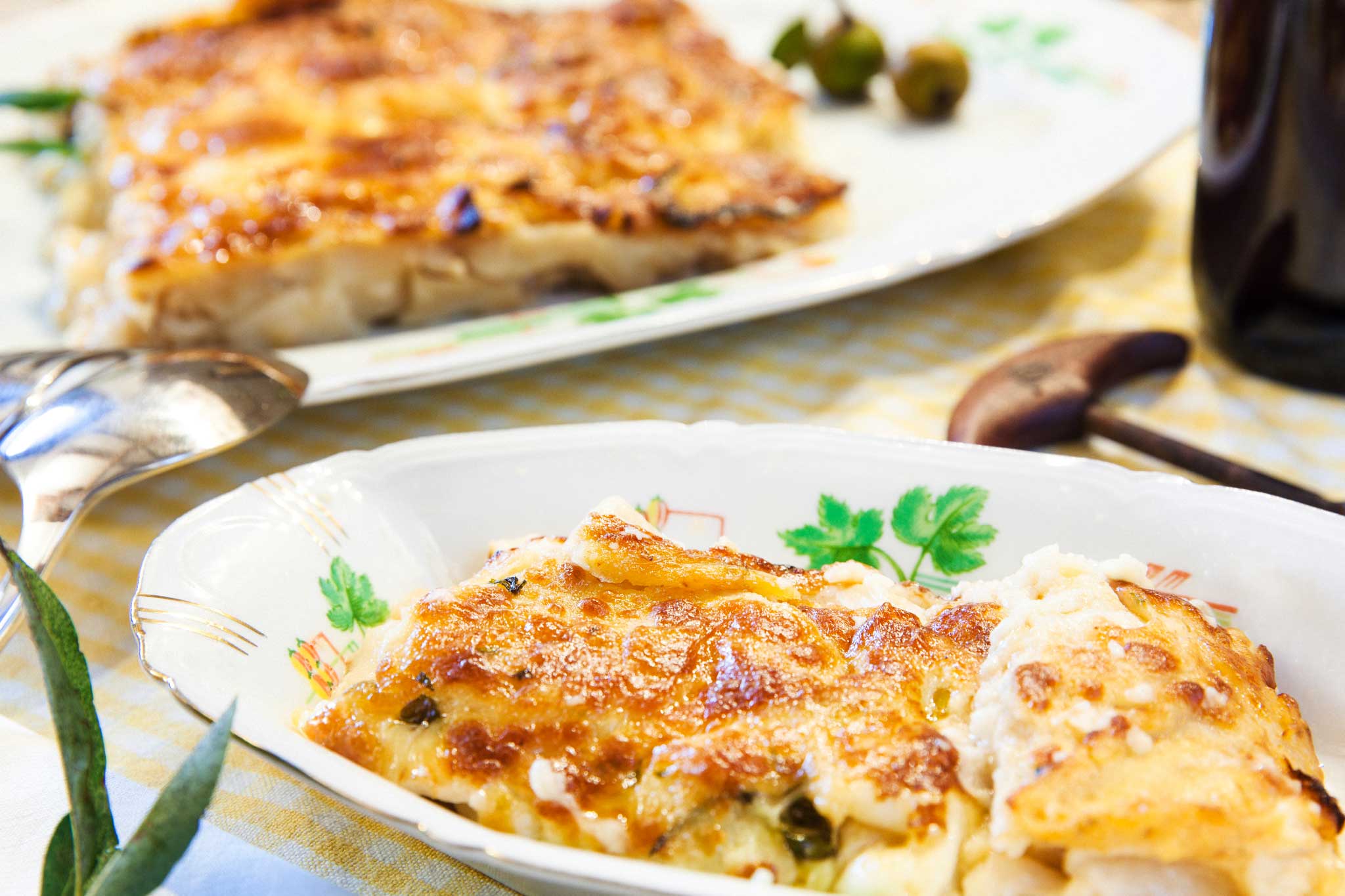 The traditional dishes of Gallura have come from the agricultural and pastoral traditions closely linked to the countryside and animal breeding. Contrary to popular belief, the Gallura culinary tradition does not involve seafood except in some coastal villages.

To find out where to eat the typical dishes of our land visit the page for some tips.

This is the most typical dish of Gallura, which once was prepared on feast days and for wedding lunches. It is easily found in typical restaurants all over northern Sardinia, although in some cases restaurants need to be booked in advance. It is a very simple dish but very rich in taste, made with stale bread, cheese and meat broth.

How is Gallurese soup prepared?

Butter a pan, and alternate layers of bread sliced ​​with cow's milk cheese (casizolu or peretta) and pecorino or grated Parmesan cheese combined with minced parsley.

Add plenty of beef and / or sheep's broth and allow the bread to absorb it well. Cook in the oven until the broth is absorbed and a golden and crispy crust is formed.

Variants of the Gallura soup

There can be different ways of preparing suppa cuàtadepending on the county. The soup can be served with tomato or veal sauce (ghisatu) or enriched with a mixture of oriental spices.

Another traditional first are the Gallurese gnocchi, called cjusòni, handmade with durum wheat flour and water. They are made with the back side of a grater or with a striped cutting board, so as to give it a rough surface. They are served with tomato sauce with basil or more frequently with beef sauce, sausage or wild boar meat.

This ravioli are distinguished from other ricotta ravioli made in other areas of Sardinia due to the slightly sweet filling. In fact, ricotta is added with a little sugar and a little lemon which gives it a pleasant tangy taste. The recipe includes a sheet of flour made with semolina flour, water and eggs. The puliligioniare usually seasoned with a tomato sauce with basil and a sprinkling of grated pecorino cheese that increases the bittersweet contrast.

Also in Gallura one can find egg fettuccine. The fettuccine are prepared with flour and a few eggs. Usually they are served cu la bagna (tomato sauce) or cu la bagna di polcavru (wild boar sauce) or even with porcini mushrooms.

A simple but tasty dish that is still not widespread in all the restaurants, the mazza is a sort of bechamel obtained from the combination of fresh milk cream with durum wheat semolina. To prepare it, heat the cream with a little water and a little salt over a high flame, add the flour and mix the semolina and wait for the mixture to release the óciu càsgiu(literally "the oil-cheese", ie the fatty liquid part of the dairy products). The mazza frissa is traditionally combined with both honey and savory dishes, such as stewed beans, but it is also excellent as a sauce for gnocchetti, accompanied by a splash of black pepper.

The king of roasted meat in Sardinia is undoubtedly the "porcetto", or rather lu pulceddu, the suckling pig. Throughout the island there is the tradition of cooking it on a spit, with the slow heat of the embers. Even in Gallura we are not far behind and today the porcetto is also easily found in typical restaurants. It is characterized by its soft and tasty meat and its crunchy rind. Baby goat and lamb are also roasted. The baby goat is also eaten stewed together with a broth of onions, celery, carrots and potatoes.

Further information on food and wine traditions can be found here. 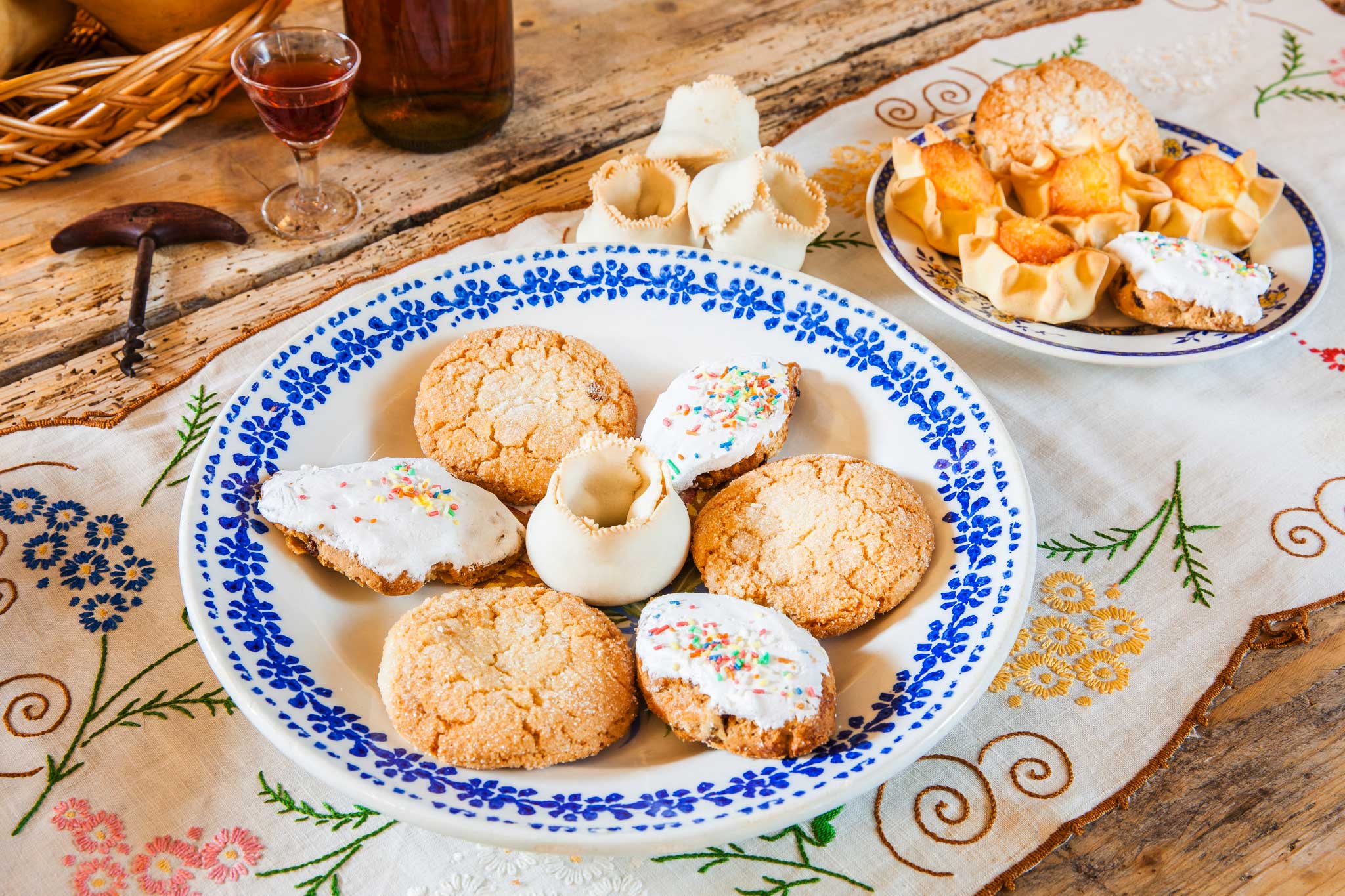 Gallura sweets were prepared in the past exclusively during the most important festivals, such as Christmas and Easter. The traditional Gallura pastry is mainly dry, which in the past allowed the sweets to be kept for several days.

Seadas are another typical Sardinian sweet that can be found in Gallura. Seadas are big ravioli made by preparing a semolina and lard paste. The filling consists of a slice of fresh cheese, which can be slightly sour, and a little lemon peel. It is deep on both sides. They are served with honey, abbamele(mix of honey, pollen and orange peel) or, less frequently, with sugar.

Papassini is one of the most common sweets in northern Sardinia. They are prepared by combining white flour, eggs, sugar, butter or lard, baking powder, nuts and raisins. Once the dough is rolled, it is cut and placed in the oven. Once cooked and cooled, they can be decorated with la cappa(icing) or with a glaze of sugar and egg white.

In Italian, one would guess that based on its name that these are almond sweets. They are prepared with a paste made of flour, sugar and lard and a filling made with ground almonds sweet and bitter, sugar, egg white. Even these desserts, like the papassini, can be simple or with the classic icing of sugar and egg white.

These sweets are shaped like a little crown. They are prepared with a paste made of flour, sugar and lard, stuffed with a mixture of honey, semolina (or breadcrumbs) and orange peel, or sapa(a grape syrup).

This typical Gallura dessert is prepared using saba, (or sapa -cooked and concentrated grape syrup) combined with eggs, flour, sugar, walnuts, almonds, raisins and mother yeast. It is left to rise for at least a day before baking it in the oven, at which point you will get a dark loaf, which can be gradually sliced.

This typical Carnival dessert is prepared with a dough made of flour and lard that is processed by hand to form some braids and subsequently fried in oil. They are served with honey or sugar.

A typical dessert during the Easter period, it is a bundle of pasta made with durum wheat flour, lard and sugar, which contains a mixture of ricotta and / or fresh cheese, eggs, raisins, sugar and lemon peel.