Lu Palazzu di Baldu: from legends to the most recent archaeological research 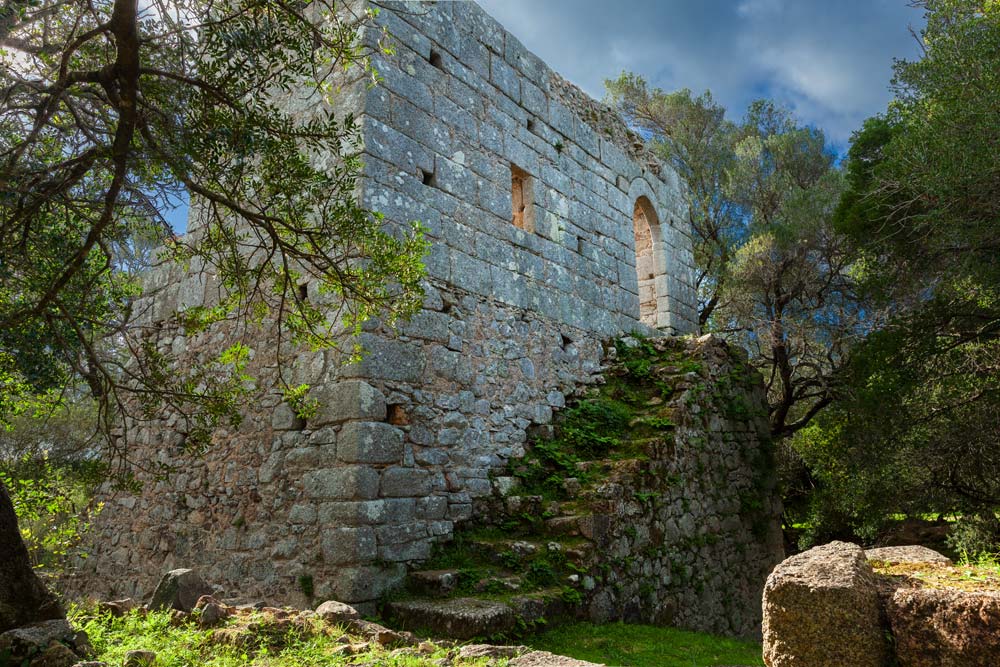 A few minutes from the centre of Luogosanto stands the Palazzu di Baldu (Baldu Palace), one of the most important testimonies of the medieval life of the Giudicato di Gallura, or the sovereign state existing between 1020 and 1296, in northern Sardinia.

The story of the Palazzu di Baldu tells of a medieval village very active in trade and almost certainly the seat of the judiciary's political power. Because of the few written documents, little is known about the monument that remains partly wrapped in an aura of mystery enriched by popular legends born over the centuries.

What was once a complex consisting of a quadrangular tower and twenty buildings around it overlooking a large courtyard remains today the ruins of the tower and some of the neighbouring structures.

Like all medieval towers, even that of Baldu enjoyed excellent visibility on the hills of Luogosanto reaching a height of almost ten metres with three floors of construction and a terrace.

The building was intended for housing and representation and was accessed on the main floor by an external staircase that still stands. On the lower floor there was a warehouse. The surrounding areas had different uses: kitchens, shops, stores and stables.

***Interesting fact: did you know that in Sardinia there are more than 100 towers from those built in the Middle Ages up to those of the most modern times? ***

The most recent studies suggest that the palace was an important centre of administration for the territory of the ‘Giudicato di Gallura’, and likely also the residence of political authority. Its location within a depression of the land constituted a natural defense together with the nearby rocks and the granite tafoni that partly hid the tower.

The nearby Chiesa di Santo Stefano (Church of Santo Stefano) is mentioned in the Catalan documents of 1358 as belonging to the Villa of Sent Stevaorde Sent Steve. The Church could therefore be the only building left of this villa. The remains of the villa overlook the church, in the countryside area that lies beyond the wall that fences the archaeological area. The church is supposed to be the chapel of the palace.

Today the church has a different appearance from the original one, having been rebuilt between the 17th and 18th century it has the appearance of the typical rural churches of this more recent period with a simple rectangular plan.

Did you know that a furnace was found among the structures near the building? It is a circular-shaped structure used for the production of ceramic and brick objects.

The Legend of Lu Baldu

Popular tradition and studies attribute the palace to the birth of Ubaldo, son of Lamberto Visconti and Elena di Gallura, Judge of Gallura from 1212 to 1238.

Other hypotheses attribute it to the memory of the father of Judge Giovanni. In fact, the Visconti family resided in Sardinia, exercising the Gallura government and carrying out important trade with ships from the Mediterranean and the entire Orient.

Even marriage unions strengthened the power of the Visconti family.

In fact, in the palace, various scraps of majolica (Italian tin-glazed pottery dating from the Renaissance period) from Pisa and Savona were found, as well as Iberian and Oriental area productions.

Some ceramic containers used for the transport of goods are further evidence of these intense trades. An exchange of gifts among the political personalities who frequented the palace are also included. In fact, glasses from Venice were also found.

***Interesting fact: Elena of Gallura was the island’s first judge and is also remembered for the attempts of various claimants to secure her hand with inverters of Pope Innocenzo III, documented by exchanges of letters. *** 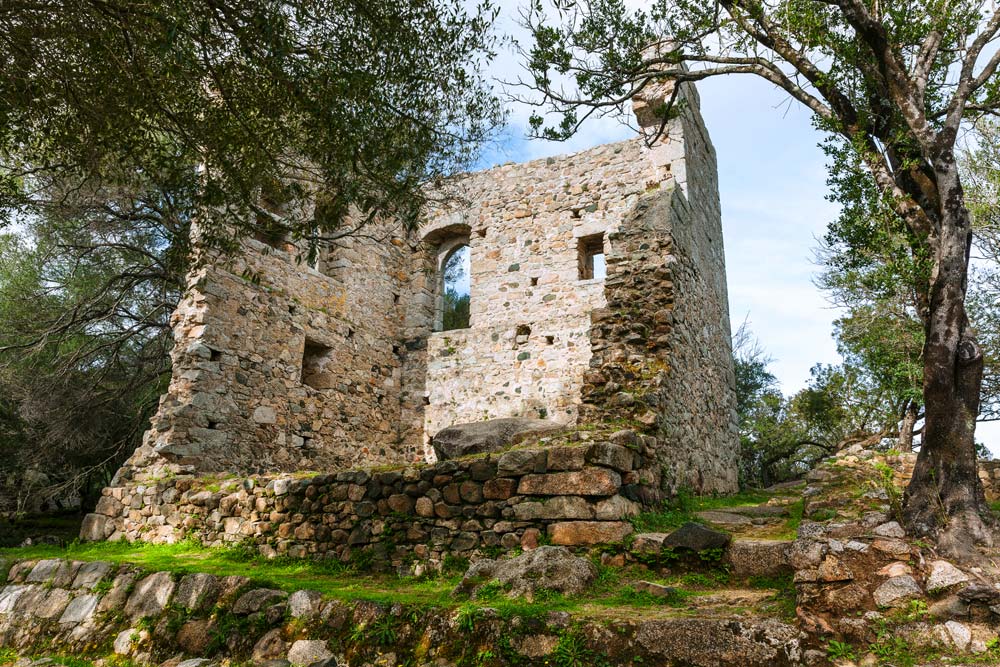 Among those who inhabited the palace there is also to remember Ugolino Visconti called Nino di Gallura, who marked the end of the Giudicato di Gallura, and is also mentioned by Dante Alighieri in the eighth canto of the Purgatory of the Divine Comedy as ‘judge Nin Gentil’.

Another interesting element of the building is a local legend, according to which in the palace the ghost of don Ubaldo wanders, survived by the massacre of his family and the village by the hand of King Alfonso of Aragon.

Since the late 90s the University of Cagliari has been working on a research and development activity of the archaeological site of the Palazzu di Baldu in Luogosanto. It is a series of projects that over the years have led to excavation activities and the creation of a laboratory on the finds, as well as activities of investigation of the territory and recognition of ruins and recent initiatives of public archeology, unique in northeastern Sardinia.

***Interesting fact: What is public archeology? It is a series of activities of dissemination, education, communication, and meeting with the communities in order to build an awareness of the archaeological heritage by the communities themselves. ***

Thanks to the concession of the Archaeological Superintendency and the Municipality of Luogosanto in 2013, new excavation and research activities began, which are still active today.

The project aims to study the site of Lu Palazzu di Baldu and the nearby Church of Santo Stefano, to enhance the whole area, which together with the Hermitage of San Trano, the historical centre of Luogosanto, the Castle of Balaiana and the Church of San Leonardo and the many other churches of the area, are part of an interesting tourist route of Sardinian medieval history.

Due to this research the peculiarity and the historical importance of the palace in the Middle Ages emerged as an administrative seat and power, and a place of intense commercial exchange with different areas of the Mediterranean. In fact, excavations have been found in the excavations of the area of ​​Genoa, Savona, as well as Constantinople, the Holy Land, Syria and Egypt. The site also contains vitreous fragments and enamelled objects with Arabic inscriptions that further testify to the royal commission and the possible exchange of gifts among the visitors of the Palazzo.

In addition to the archaeological site of Baldu, the University has made a series of surveys in the territory of Luogosanto which results in having a central position among the different villages of the Giudicato Gallurese, which needs to be studied further.

The University of Cagliari continues its research and training activities today. During summer of 2018, in Luogosanto, the University organized the School of Archeology and Community dedicated to enhancing the recent archaeological research through the involvement of local communities and the study of the social impact of archeology.

The 10 participating students followed a series of lectures dedicated not only to the study of archaeological finds and sites in the territory of Luogosanto, but to the new communication systems in order to disseminate the research results and understand the role of the archaeologist in social development and economic community.

It is in Gallura, in fact, that the University of Cagliari is carrying out a series of initiatives of ‘public archeology’ aimed at enhancing archaeological research and promoting its communication, as well as making the communities of the heritage proper to them reappropriate. For this reason, for example, excavation sites are also visible to visitors in such a way that anyone can see what they are doing. It is therefore a new concept of excavation and communication that is spreading.

On the occasion of the 790th Festa Manna di Gaddura (Manna di Gaddura Festival), the students of the University of Cagliari collaborated to enrich the cultural program by organizing guided tours, public conversations in order to enhance the archaeological heritage of Luogosanto, and encouraged the meeting between citizens and those working in the archaeological sector in the territory.

Among the initiatives organized were ‘Baldu Trentapiedi Junior’, a ‘pedestrian traction convoy’ dedicated to making the little ones discover the archaeological area of ​​Lu Palazzu di Baldu, a night excursion to the Hermitage of Santi Nicola e Trano, a mountain bike trip, and an ArcheoTalk (or a public conversation) among the leaders of local archeology.

Excavations will continue at the archaeological site of Lu Baldu in the coming months.

To stay up to date on the activities of the University of Cagliari at the Lu Baldu site you can follow the Facebook page "Luogosanto Medievale. Archeologia e comunità".

If you would like to retrace the medieval history of the Giudicato di Gallura and discover the archaeological site of Palazzu di Baldu, you can contact the expert tour guides who will accompany you on your tour. You can choose to accompany your tour with a visit to one of the monuments of the territory of Luogosanto or with a sport activity.